Can a member of the United States Marine Corps return to unrestricted full duty after a cervical fusion?

How about a Navy SEAL or a Navy F-18 fighter pilot?

Wearing a 60-pound rucksack for hours, parachuting from 11,000 feet, diving into the depths of the ocean or flying a jet fighter at twice the speed of sound is part of life for an active duty service member in the in the U.S. Navy and Marine Corps. Over the years, a lot of scientific articles have been published on patient outcomes from cervical fusion surgery, but none offered military neurosurgeons any insight on the capacity to return to full active military duty after a cervical fusion. On behalf of neurosurgery and the military, Navy neurosurgeons at the Naval Medical Center in San Diego designed a study to answer the question:  Can an active duty service member return to such duty after a cervical fusion operation?

After reviewing the records of 132 active duty sailors, Marines, soldiers and airmen, the researchers identified that the answer to the question was a resounding “Yes!” The results of the four-year study demonstrated that 88 percent of active duty members were able to return to active duty by the third month after either a single level or two level anterior cervical discectomy and fusion. When examined by rank, the results appear even more impressive. Senior enlisted personnel and officers (E7 or higher) had a 99 percent rate of return to unrestricted full duty. It appears that the longer an individual has been in the military, the more likely they are to return to full duty after a cervical fusion as time in service directly correlates with a higher rank. It is likely that these individuals are more invested in the military and see themselves making the military a twenty-year career, providing added incentive to return after an operation.

Long-term analysis of the service members in this study showed that once returned to active duty they are likely to stay on active duty. In fact, according to the military physical readiness information management system, at 36 months after surgery, 90 percent of those postoperative cervical fusion patients in the study were found to be regularly participating in the military physical readiness test, without the need for a waiver. 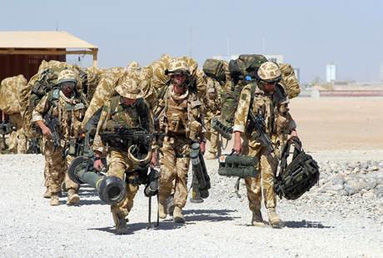 The information gleaned from this study is extremely valuable for military neurosurgeons counseling a young Marine, who may be concerned about the prospects of his or her military career after a cervical fusion. It can also readily translate to most occupations in the civilian sector. Firefighters, policemen and border patrol agents have similar physical demands as active duty military personnel. The data from this military cervical fusion study is of critical value to neurosurgeons offering guidance to individuals in those professions who may need such a surgery. For those patients who maintain active lifestyles participating in competitive sports and high impact activities, the data from this manuscript is equally reassuring. Few careers have more physical demands on an operation than active duty in the military.

In the final analysis, the low complication rate and high success rate reported in this study will be encouraging to all patients who have cervical radiculopathy (nerve root compression) or impingement of the spinal cord. These patients have an excellent option for addressing those symptoms and can be confident that they will be able to return to an active lifestyle and resume work. This is the epitome of the win-win-win situation — a safe and effective surgery that restores the quality of life, addresses societal economic factors, and allows resumption of functional status. Clearly the findings of this current research would suggest that the anterior cervical discectomy with fusion passes muster, not only in the military but also with non-military patients.

Editor’s Note: We encourage everyone to join the conversation online by using the hashtag #SpineMonth.